A Common Problem And Solution

AAC Block surface is the most common reason of crack development of plaster and putty finish on AAC Block masonry. Autoclaved aerated concrete (AAC) is manufactured using cement, fine aggregates and an aerating additive. The Aerating additive makes the mix lump into a dough. Mostly AAC Blocks contains a large amount of air. The prepared mix is put in mould and cut into desired dimensioned units. The major advantages of AAC Block is its light weight, insulation and easy installation with cost-effective benefit. Water ingression cannot take place through AAC Block. Water absorption property of AAC Blocks was investigated by capillary suction method. It was found that the inflow height (i) of water in aerated concrete by capillary suction effect was a function of the elapsed time (t), i. e. i=a + s × t 1/2. Based on the theory of Laplace and characteristics of aerated concrete, the physical implication of the parameter “a” and “s” in the formula and their influencing factors were discussed. The results showed that “a” was mainly depended on the pore radius of the surface layer of aerated concrete and “s” was determined by the total porosity, the quantity of connected pore and pore size distribution of aerated concrete. According to the observation of the profiles of macro pores in aerated concrete, the relationships between capillary absorptivity and connected pores, pore size distribution of aerated concrete were investigated, by which the theoretical analysis mentioned above was proved to be appropriate. The impermeable surface property of AAC Block has welcome the major disadvantage, which causes the crack development on plastered surface.

The reason is very simple. As the cement slurry is not absorbed by its surface, it can’t function as a key to hold the plaster on it.  This phenomenon is the root cause of deboning between AAC Block surfaces and plaster or putty on it. The lack of bond between cement particles causes surface bond failure of plaster. But the expansion–contraction property is not at all similar to the plaster on it. Considering the above two factors in study, it is established to state that plaster on AAC Blocks definitely will crack.

There is a practice to limit this problem is introduced by using polymer adhesive based system. But, that has a limitation of bonding due to its reduced durability under weather action. The kind of polymer used for the purpose is degraded under weather action, mainly the storm water affects its structure. Low pH of storm water slowly degrades the molecular structure of the bonding polymer in this case. As a result, the plaster on it or with the polymer is degraded and cracks are developed at random and surrounding the degraded polymer. This has raised a big question to the advantage of AAC Blocks. 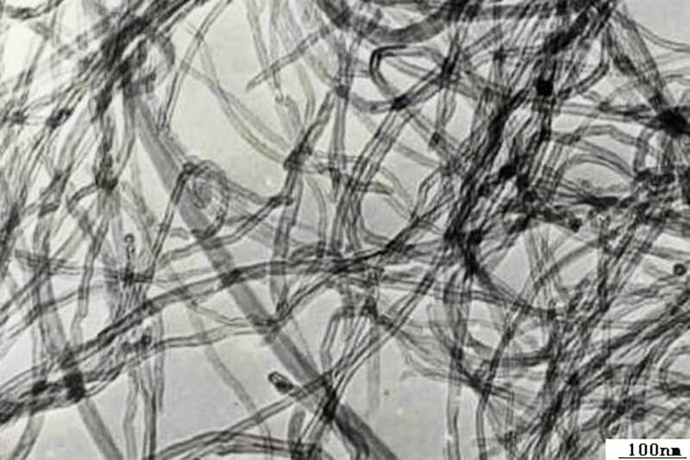 A long study and use of a Nano composite has shown the way to get rid of this serious problem. The Nano tubes has played a great role to stop this crack development problem of plaster on AAC Block. Nano tubes in plaster mortar helps to produce key between cement particles in calcium silicate hydrate gel. The resultant products after reaction between Nano composites and cement produces a Nano particle flow towards the surface of the AAC Block, which makes a key between the plaster and the AAC Blocks. This flow of Nano particles towards the horizontal axis is called horizontal suction. Similarly the vertical suction plays the same role in producing key between the cement particles. This inward flow creates millions of keys to hold the plaster mortar to the AAC Block surface. There are many such evidences which has proved its efficiency and also named as BOND FLOW. The BOND FLOW has a great impact to make the plaster durable on AAC Block. The advantage of the Nano Bond Flow is the faster plastering work and reduced rebound loss. As the Nano composite is an inorganic in nature, it has no degradable property under weather action, after formation of calcium silicate hydrate hydrophobic gel the plaster is formed into a hydrophobic monolithic substrate with AAC Block. The monolithic cover behaves similar expansion contraction property with AAC Block. This exquisite property of the Nano composite is proven successful to stop any crack propagation in hydraulic material like cement and putty. The putty also behaves similarly with Nano composite on AAC Blocks and other non-porous surface. The study is conducted based on a Nano composite product, which is widely used in many constructions built by AAC Blocks. The product has proved its efficacy to prevent these types of cracks and in the field of waterproofing of structure too.

The study conducted on SYLOCON® is analyzed by Scanning Electron Microscope and X-ray diffraction. Also the product is tested on several projects all over India and it is established as an only tool to prevent cracks on plaster and putty on AAC Blocks and non-porous structure. ANTIMICROBIAL HERBAL OILS AIR AND SURFACE SANITIZING SPRAY   Nature has full of wealth which helps us to survive...